The Weirdest Clouds Are Like An Art In the Sky (Look Up!) 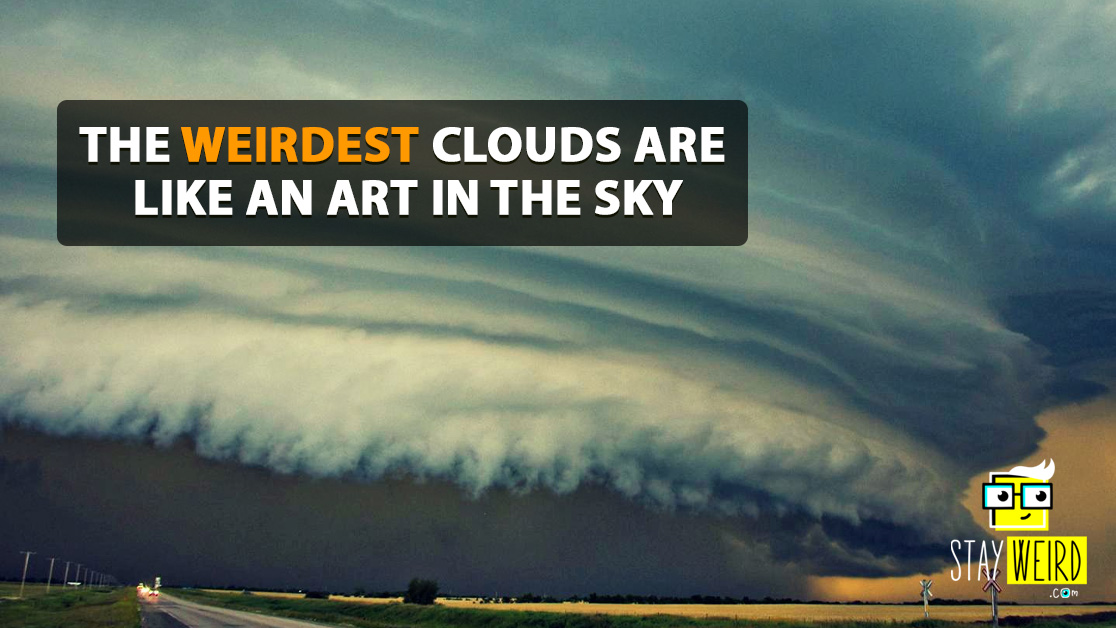 Daily we see lots of different shapes of clouds in the sky. It feels like an expert artist showing his art to the whole world. Have you ever wondered what the reasons are? How do clouds form these shapes? Don’t worry. We are here to get you covered.

When the weather conditions rapidly change, like one minute before it was burning hot and the next moment it is heavy downpours. Due to the rare phenomenon, clouds produce strange shapes, common during spring or winter.

Let’s discuss the science behind the weird and unusual cloud formation. 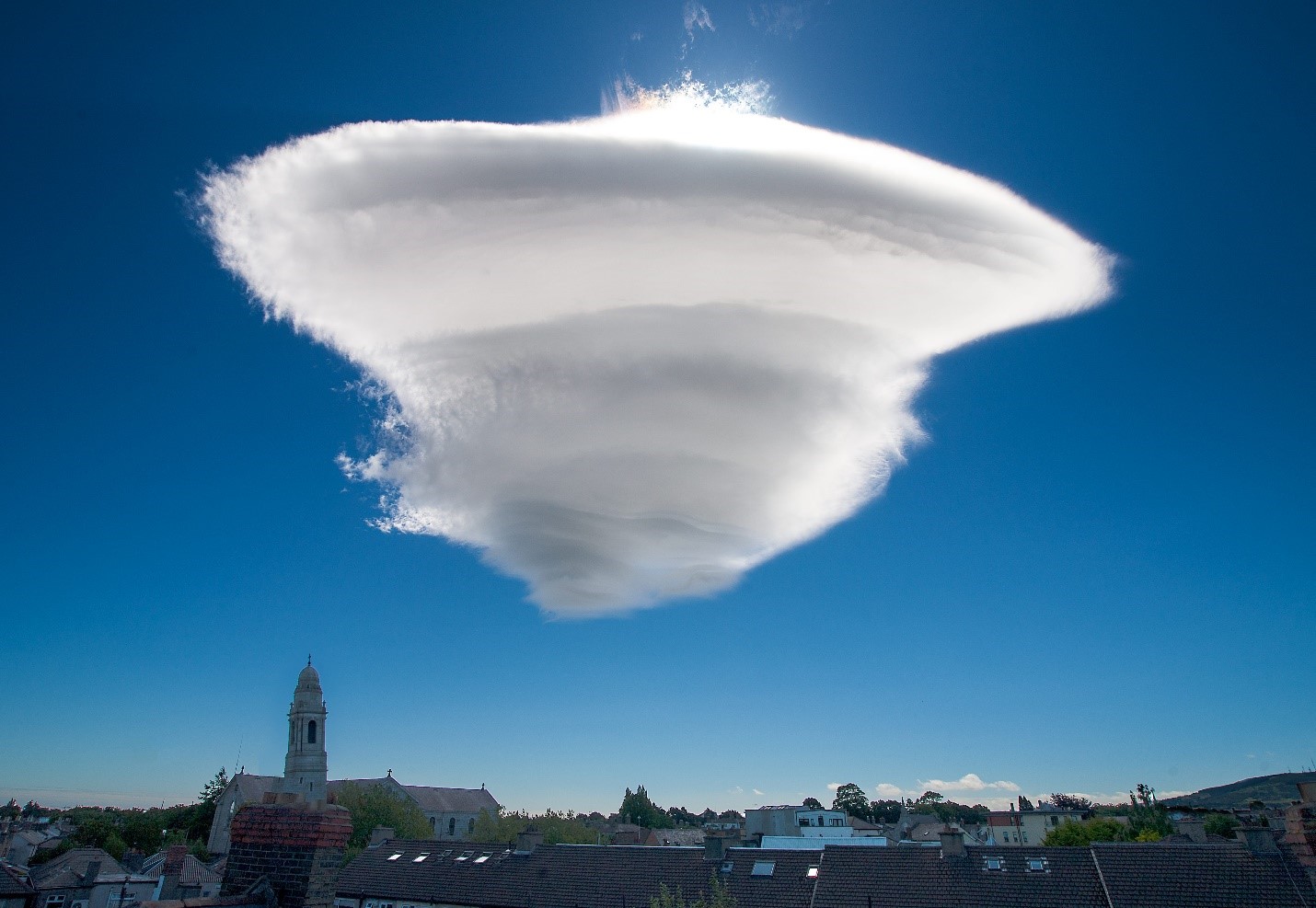 The lenticular clouds are oval or lens-shaped like clouds, often compared to the stack of pancakes or UFOs. You might be finding the reason why it happens? So, when the high winds come in contact with the huge building or mountains, the rising air is compelled and pass over them.

When the air rises, its temperature decreases. If the air has enough moisture, it could be the reason for the formation of flat clouds at the wave crest. The saucer-shaped cloud forms due to the movement of oscillation of the air. In other words, we can say that when there is any disturbance in the airflow patterns, we can see this type of cloud formation. 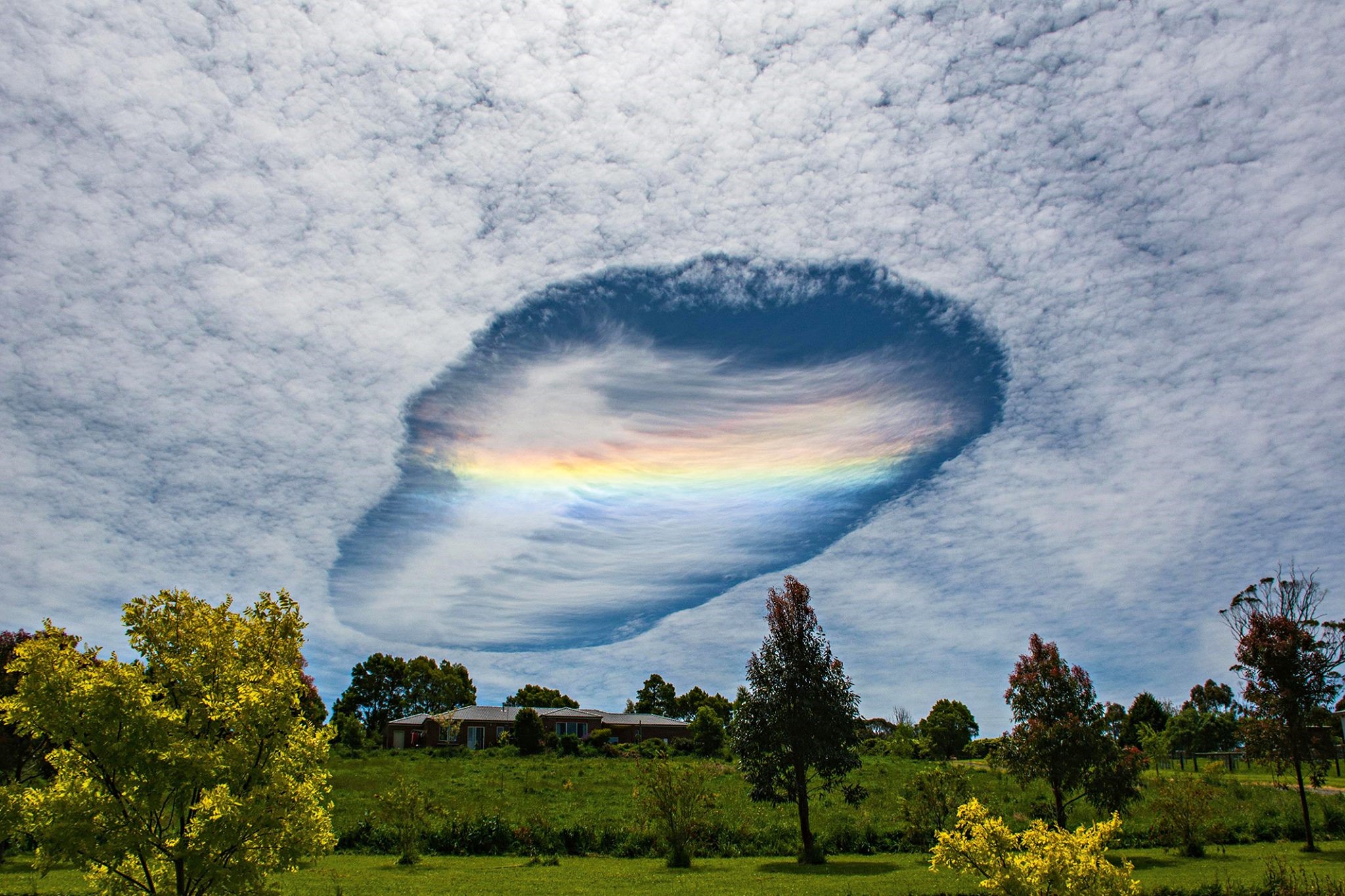 The Fallstreak Holes clouds are also known as “hole punch clouds.” If you deeply observe these clouds, you will feel that someone used a hole puncture on a cloud to create this look. This cloud formation is when the water droplets are below freezing temperature but not yet converted into ice.

The surrounding water vapor evaporates, leaving an empty ring shape that leaves a hole in the cloud. 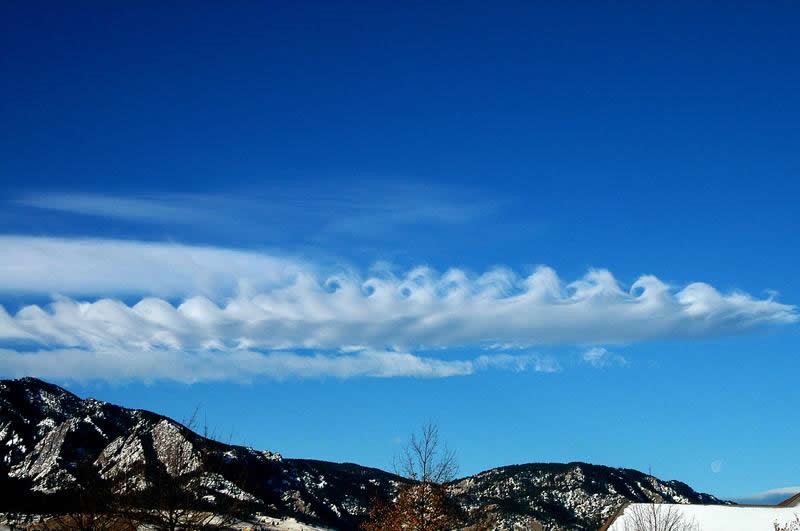 We observe another beautiful art in the sky similar to the beautiful cresting ocean waves commonly known as the Kelvin-Helmholtz clouds. These clouds are named after Lord Kelvin and Hermann von Helmholtz, famous for their studies of the physics of instability which leads to these cloud formations.

The explanation behind kelvin-Helmholtz cloud formation is when two layers of warm air cross at different speeds, oscillating at the boundary between the two fluids. When a few parts of one move up and some move down, similar to actual waves responsible for forming these clouds. 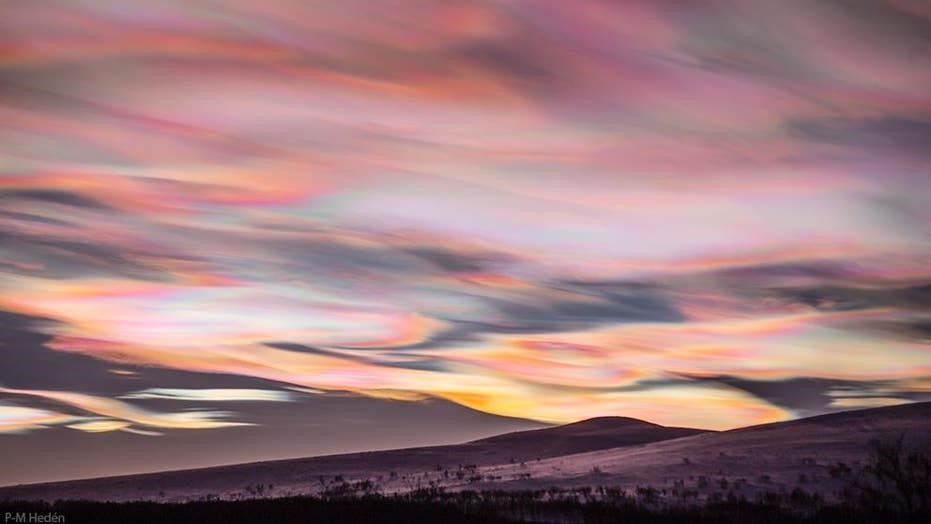 People living in polar regions such as Canada or Scandinavia have higher chances of seeing impressive rainbow-colored clouds in the grey winter sky. Over the past few weeks, people from the UK have been lucky enough to watch this beautiful phenomenon recognized as nacreous or polar stratospheric clouds.

The nacreous clouds usually build in the winter polar stratosphere, a layer of the earth’s climate around 15,000 to 25,000m. The normal temperature of the stratosphere is extremely dry, which means cloud formation happens rarely.

However, heavy rainfall drives high moisture in the climate. But these clouds will only come in shape when the temperature is below -78 degrees Celsius. The chilly weather turns water vapor into ice crystals or cool liquid, which happens only during winter at high altitudes. 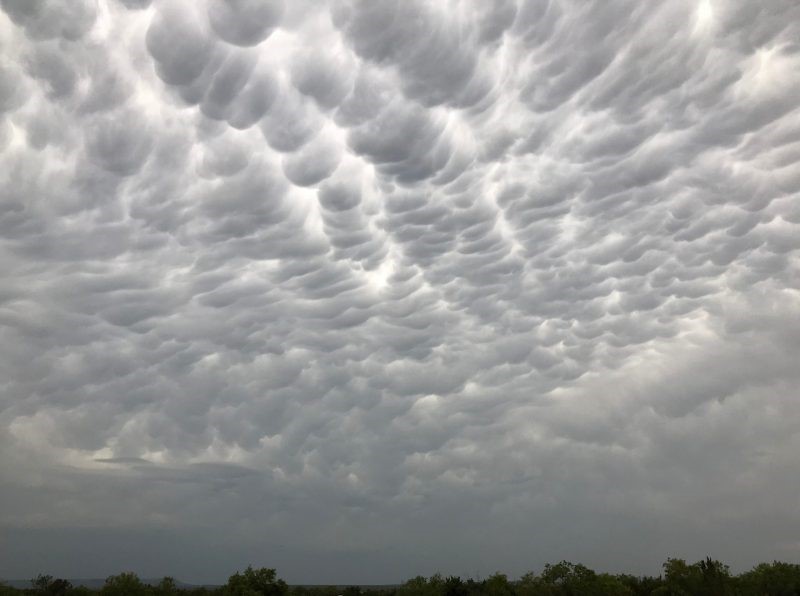 Mammatus cloud formation is one of the most unique and distinct cloud formations. They are ice-filled clouds hanging in the sky under a cloud’s anvil, mainly during storms. Now you might be wondering the reason for this formation. So the exciting thing about them is that they form by the cause of turbulence within the cumulonimbus cloud.

In other words, cumulonimbus clouds are known as thunderstorm clouds that are huge and unstable. When there is a hailstorm, rain, thunderstorm, or rain and lightning, these all can happen due to the unstable conditions of the clouds. 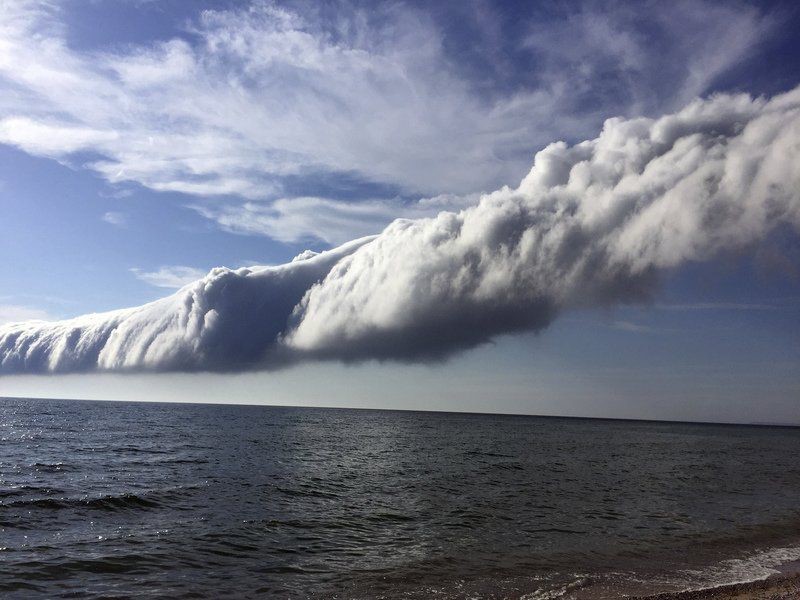 Another unique formation of the clouds is known as arcus clouds. In other words, it is also called roll cloud or shelf cloud. This formation is responsible for the stunning sky view we can observe from the planet. But there are various meteorological phenomena behind mere looks.

Usually, there are two types of arcus clouds that we have stated before: roll or shelf cloud. You can enjoy these beautiful formations underneath the storm or cumulonimbus clouds. Arcus cloud formation only forms when there is enough moisture in the atmosphere to manifest. The right time for the roll clouds formation can be before or during the storm. 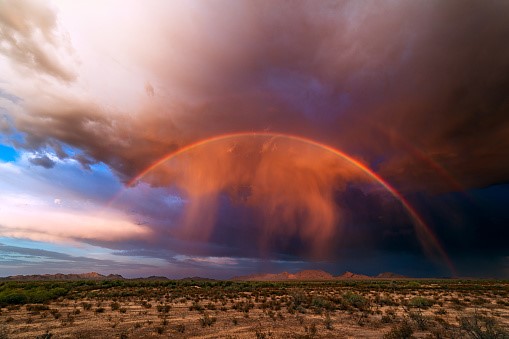 Generally, you can describe Virga as a jellyfish because of their similar appearances. You can see these weird clouds forming during the sunset when clouds are illuminated by the sun and the cool breeze twisting their long hanging tails.

We can say that the Virga is a rainfall that evaporates and doesn’t reach the ground. The precipitation falls from the cloud base but doesn’t correctly touch the earth. It can only be seen through radar, but you cannot actually feel or see this rain. Although the Virga clouds form the prettiest panorama in the sky, they are pretty different from other types of clouds. 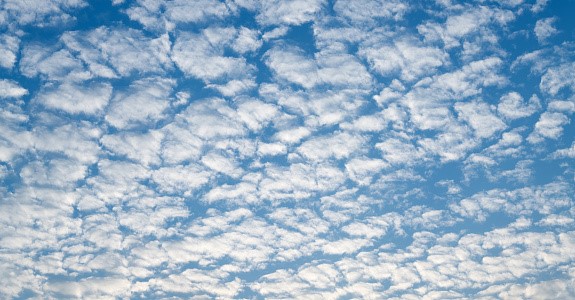 Mackerel clouds are the ones that help ships to carry low sails. In the past, cloud formation was also the source of indication for the ships whether they or the sails on the boats needed to be lowered or not.

The altocumulus clouds and cirrus clouds are responsible for forming these clouds. This cloud forms before the storm, so we can say that they indicate hurricanes which is helpful for sailors to lower their ships. It is formed due to the excessive moisture in the air, which indicates that rainfall is closer.

Also Check: 10 Weirdest Laws In Texas Will Leave You Scratching Your Head

The crazy clouds in the sky are not only the source of the beautiful scenery you can enjoy from the planet. But also, there are various meteorological reasons behind this formation. Such as a few formations occur due to the instability between the two clouds, and some are formed to indicate a storm or rain.

We have tried to mention a few reasons for the formation of these unusual clouds. From morning glory clouds to hole punch cloud formation, these sights are a must to watch. We hope you’ve enjoyed them. Let us know in the comments below.